The Truth about the ‘Blood Type’ Diet - Healthy Living Association

Home / All Natural Foods / The Truth about the ‘Blood Type’ Diet

The Truth about the ‘Blood Type’ Diet 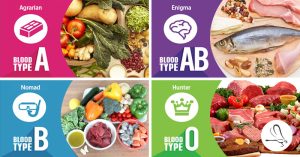 One of the most popular diets in recent years has been the Blood Type Diet, which suggests that people eat foods most agreeable with their genetic blood type. There are books, videos, social support groups, and plenty of related literature on the topic, as well as a massive body of medical opinion that counters much of the advocates’ claims.

What exactly is the BT diet, where did it come from, who are its main proponents and what does the scientific research community think about the program? To put the diet in perspective, it helps to examine fad diets in general and see why they are routinely ineffective.

Since the 1980s, there have been more than 100 different diets touted by their creators. While most are weight-loss oriented, some claim to “cure” or treat various physical ailments, and others are said to enhance consciousness or add years to one’s life. Like any other category of consumer products, diet plans and books (there is invariably a best-seller behind each of the new regimens) have an upside and a downside.

The Blood Type Diet, popularized in a best-selling book, offers different eating plans based solely upon a person’s blood type, whether it’s AB, O, A or B. The original BT diet was created by a naturopathic physician and has come under assault from a variety of sources.

Facts and figures about the BT diet:

The dangers of so-called “fad diets”

Some people categorize the Blood Type Diet as a modern fad diet. Whether this is accurate or not, there are some common elements of fad diets that consumers should be aware of.

Anyone who wants to lose weight or go on a diet or exercise plan that is new for them should consult a physician before doing so. Eating a balanced meal plan each day and taking part in regular exercise is usually all it takes to maintain a healthy weight.