Home / General Health and Well Being / The Secret to Making, and Keeping, New Year’s Resolutions

The Secret to Making, and Keeping, New Year’s Resolutions

Wouldn’t it be great to know how to make New Year’s resolutions that are realistic, positive and life-enhancing? There actually are ways to draw up a list of goals that are not vague, “pie in the sky” dreams like, “I’ll lose 50 pounds by July,” “That new job will happen,” or “This year, I will become a better, kinder person.” Bumper stickers slogans are not goals; they’re just bumper sticker slogans (seen on a bumper sticker).

All those sentiments are uplifting and positive, but just don’t make the cut for people who want to use the new “S.M.A.R.T.” method of creating New Year’s resolutions that are achievable. Here’s what the experts have to say about this clever method of making January 1 goals and sticking to them.

The new acronym making the rounds is “S.M.A.R.T.,” which stands for specific, measurable, achievable/attainable, realistic, and timely. Those are what psychologists say should be the ingredients in any effective New Year’s resolution list, or any list of personal goals you draw up for whatever reason.

The SMART system helps hold the goal-setter accountable with specific mechanisms like measurability, where you don’t make a goal unless its progress can somehow be objectively measured.

Measurability is the M in smart. The S deals with making the goal specific. Instead of saying, for example, “I will work out more frequently,” make the resolution specific about how you’ll workout. That might mean saying, “I will lift weights two times per week and ride my bicycle three times each week.” Specificity makes the target clearer, and more likely to be attained.

Every resolution should be achievable. Vowing to lose 100 pounds by July is specific and measurable, no doubt, but it’s not attainable by the average person in the real world. Achievability turns vague dreams into sensible benchmarks.

Closely related to the idea of attainability/achievability is the concept of realistic goals. Losing 20 pounds by next December might be attainable (physically), specific and measurable, but perhaps, for you, it’s not realistic. Maybe you’ll be on a year-long job assignment in an exotic, overseas location. That would make it extremely hard to meet the weight-loss goal.

Or, if you decide to improve your wardrobe but just don’t have the money right now, that’s another example of an unrealistic goal. Realistic New Year’s resolutions fit into your life in such a way that you don’t have to turn everything upside down to attain them.

The final piece of the SMART puzzle is the letter T, which stands for “timely.” In other words, make sure your goals have some element of timing in their wording. “I’ll get a 5 percent raise by July 4,” “My weight will be less than 160 pounds by December 1,” or “I’ll file my taxes by March 10,” are all good examples of including the time element.

When you make New Year’s resolutions this December, be sure to use the SMART system and your chances of being successful will increase a hundredfold. Here are some examples of common resolutions that can make most anyone happier, healthier and more satisfied with life: 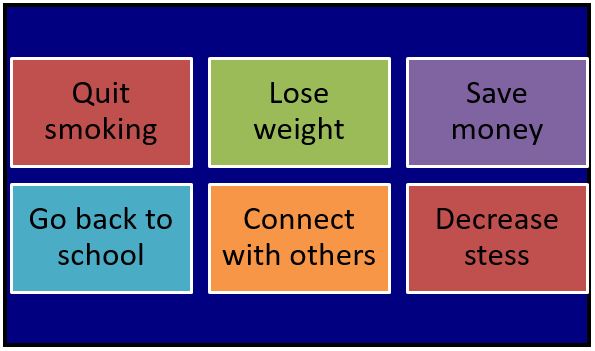 Now that you know how to stick to New Year’s resolutions, here are some that address specific areas of health, wealth, and overall wellness (both physical and psychological). Take your pick and remember that it’s best to just have a few annual goals to avoid being overwhelmed. Surveys reveal that most people who make resolutions each January choose just one or two items from that “most common” chart above, so the ideas below can be a source of inspiration if you’re deciding on what to achieve in 2018. Happy goal-making.

Lose weight: This is by far the most common resolution that people make, and then fail to achieve. On a positive note, there are sensible ways to approach the weight-loss goal, as long as you realize that dropping pounds permanently calls for a lifestyle change, patience and commitment.

Experts advise using a journal to record not just your daily weight, but also how you feel, what you eat, and what problems you encounter along the way. Every weight-loss journey has a few bumps in the road, but that is to be expected.

Besides journaling, nutritionists say that long-term weight loss works best if you have someone to help hold you accountable, even if that person is not dieting with you. You need someone to help you when times get difficult, and to assist you when roadblocks appear, typically at the one-month point in a weight-loss plan.

Quit smoking: Like weight-loss, smoking cessation can be extremely challenging without a support network. Here is where it really helps to have a quit-smoking “buddy.” This person need not live under the same roof, but should be someone you can call or text when you need moral support in tough times.

Medical experts on smoking say that you should experiment with different methods until you find one that suits your personality and lifestyle. It’s also a known fact that quitting tobacco is near the top of the list of most-challenging resolutions. Doctors say not to be discouraged by several failed attempts, noting that successful ex-smokers typically try at least three times before succeeding.

Another way to help get though a smoking cessation program is to make a mini-budget that shows how much money you’ll save over the months. Most people are shocked to learn that even a half-pack-per-day smoker saves approximately $1,000 per year after quitting. And that just reflects the cost of cigarettes. Consider the health benefits, better-smelling clothes, and sense of accomplishment too.

Connect with others: This usually means putting the smartphone down and interacting with other human beings more often. Remember to be specific with this goal, and to make resolutions like, “I’ll go hiking with my family at least twice per month,” “I will call three old friends each month,” or “I’ll take my parents to the store every weekend.”

Scientific research shows that lack of human connections in our lives can be as detrimental to long-term health as smoking, over-indulging in alcohol, being obese or not exercising. So, pick up the phone, or get in the car and start connecting. It’s a resolution that is all the more critical in the cyber society we are living in.

Save money/spend less: This goal requires a written budget and at least a bit of calculation. Sit down with your monthly expense and income list and see where you can save a few dollars. Financial planners say the average American overspends by 3 to 6 percent, which is actually good news when viewed as an opportunity.

Go back to school: Why not take a class in a subject you’ve always wanted to learn more about? Or, pursue a full-blown degree in your spare time. There are hundreds of different ways to approach an educational goal, so make sure you are specific about what coursework you want to take, how you’ll pay for it, and what the timeline will be.

Decrease your stress level: You’ll have to make this resolution specific for best results, but doctors say it’s something that can pay big dividends for your long-term health. Maybe you will stop watching the news three times per day, or start meditating for 10 minutes each morning.

Everyone can examine their own “typical” day and come up with some de-stressing techniques. See what you can do to make like less demanding and complicated. There actually an entire social trend based on this concept; it’s called “de-cluttering,” or “simple living,” and there are hundreds of books on the subject if you want to pursue this kind of New Year’s resolution.

Decrease your alcohol consumption: If you think you have a full-blown drinking problem, seek professional help. But if you just see yourself needing to cut down on the beer, wine and partying, then make an alcohol-related resolution for 2018. This one calls for being totally honest with yourself, and being careful to note whether you might actually have a more serious problem (in which case you should contact a professional and seek help).

If you simply want to cut down, be very specific, and read up on how much better your overall health will be. There’s also the financial component, as with smoking. Alcohol costs money, especially if most of your drinking takes place in restaurants and bars.

Travel: Travel as a New Year’s resolution might seem odd to some people. But keep in mind that some of our goals should be geared toward making life simpler and less stressful. Experts say that the majority of people just don’t plan their travel goals carefully enough, which is why years can “slip by” without a real vacation.

Now is the time to make goals for 2018. Using the SMART method can make goal-setting fun, realistic and a way to improve life in large or small ways. Feel free to let us know what kind of goals you intend to set for the upcoming year and whether you’ll be using the SMART system to achieve them.

Leave comments below or on our Facebook page. We always enjoy getting feedback from readers. Have a happy, healthy and productive 2018.