Home / Exercise, Movement and Fitness / The 12 Top Fitness Trends for 2017 and Beyond 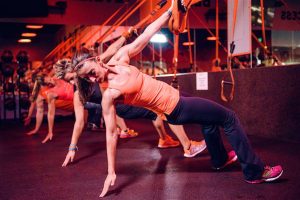 Every January brings a fresh wrinkle to the fitness landscape and 2017 is no exception. Several already established trends will become more deeply ingrained in the culture; others are newish concepts that are still taking hold. A few others are completely new to the scene.

If there is one mega-trend to look for in the upcoming year’s scene it is computerized data collection for personal fitness. Two decades of computerization have made it simple to aggregate and analyze every conceivable physical parameter, from weight gained or lost, to miles walked or run. No measurement is left untouched.

Here are the “dazzling dozen” fitness trends to watch for in 2017:

Outdoor training: Sports and fitness enthusiasts are rediscovering the outdoors, while some look to outdoor workouts as a way to get away from technology of all kinds. Social groups that hike, play tennis, run, swim and rock climb together are on the upswing. Many are sponsored by or organized by major clubs, complete with “official” guides and trainers. Oddly, as technology begins to creep into every crevice of society, some people are looking for ways to escape the dominance of computerization.

Personal training in groups: It was bound to happen. For people who can’t afford the hourly rates of one-on-one trainers, there is group personal training. These arrangements are a bit different from the classic trainer and student setup. In many of the group classes, the trainers are actually teaching their students how to design workouts and eventually be independent of the trainer.

Safety and outdoor-specific gear: Technology will not be denied, as evidenced by the massive growth of the fitness gear industry. GPS devices are probably the best-known of the bunch, but other rugged gear built for outdoor training includes portable power packs, satellite navigating devices, and high-tech “utility backpacks” complete with an emergency phone, water, rations, a GPS device and emergency flares.

Swimming: Another “comeback” workout, swimming classes and individualized workouts are enjoying a huge lift in popularity as a result of the recent Olympic Games. This sort of thing happens after every summer Olympiad, but this time, experts say, it’s different. Bona fide celebrities like Michael Phelps and others have propelled fitness-based swimming into the national consciousness. Wherever there’s a pool or a body of water, there’s a swim class going on.

One of the sub-categories of this niche that has been catching on rapidly is tethered swim workouts. Even small pools are a good setting for this intense form of resistance training. Swimmers are harnessed and tethered to one side of the pool and can swim, quickly or slowly, away from the tether point for an invigorating workout.

Walking: The oldest, simplest and safest workout is a candidate for the 2017 fitness trend of the year, by any measure. With tons of medical data and enthusiastic physicians to back it up, walking has countless advantages: it’s easy to do, there is minimal risk of injury, speed can be adapted to an individual’s ability, it can be enjoyed by any age group, and it allows for social interaction during workouts. Even “power walking” sessions (typically done at a 15-minutes-per-mile pace or faster) can turn into gabfests for small groups who enjoy this type of workout. Supplemented with a dose of moderate weight training, walking can be the central component of a successful and fun workout regimen.

Recovery time makes a comeback: There’s been a lot of emphasis on recovery as part of a well-balanced fitness regimen, especially from trainers and health experts who note the dangers our burnout and overtraining. The concept was pioneered by marathon coaches in the 1990s, many of whom saw firsthand the damage that high mileage workouts could inflict. The Galloway Plan was one such program that incorporated rest periods into long runs, a practice that was widely criticized two decades ago but is commonplace today.

Combo workouts: Ever heard of Piloxing? How about Yogazzercise? They are just two of the hybrid group classes that are now mainstays at many of many big gyms. It’s a way to break the boredom of doing just one thing for a full hour; but it also offers a smart way to achieve a nice cross-training effect and have fun at the same time. Pilates and boxing are mashed into “piloxing,” while the old favorite, Jazzercise, has been teamed up with a yoga warm-up and cool-down to create Yogazzercise. Other combo favorites on the scene are running and weight training, rowing and calisthenics, and boxing-with-cycling.

Specialized workouts: Visit any of the gym franchises in the U.S. and you will invariably notice a full roster of “classes” on the calendar. There are specialized courses for seniors, teens, yoga enthusiasts, spinners (cycling classes), boxers, martial arts beginners, moms-to-be, and even disabled athletes. This trend has been slowly creeping into the fitness franchise world for a few years but is now going mainstream.

Faith-based teams and health clubs: What has proven successful for the corporate world is being replicated in churches all over the U.S. as faith-based teams and workout groups are popping up in every major city. Because so many churches are affiliated with schools, which already have their own gyms, a church-based fitness plan is a natural outgrowth of the school-church relationship. In New York, LA, and Dallas, there are fitness clubs that are closely connected to mosques, churches, synagogues and ashrams. One big advantage for members is free or super-discounted membership costs.

Workplace health and fitness programs: What was once an oddity is now a common practice: workplace-based fitness programs, gyms and health monitoring plans. Because corporations have seen such a positive response to in-house gyms and subsidized fitness club memberships, the set ups have really taken off. Companies are finding that their workers are happier, healthier and more productive when they have opportunities to workout at work, or to get a gym membership for free.

Apps: There is no question that one of the biggest growth areas for the next year will be fitness apps. Already a mainstay of health clubs and used by millions of solo workout buffs, phone-based apps can help track everything from weight routines, nutrition regimens, runs/walks, and hundreds of other personalized fitness goals.

Wearable tech: New ideas and developments in the wearable fitness niche have made all sorts of gadgets commonplace. Wrist bands that track mileage made their debut several years ago, but the industry has grown to encompass smart-watches, heart monitors, and dozens of kinds of fitness tracking devices. Mega-corporations are in on this trend, which means that it’s probably here to stay.

When Wall Street giants like Apple and Garmin are all in, that’s a sure sign that wearable fitness devices are already part of our daily lives. Apple’s clever idea of allowing users to combine about 20 different fitness-tracking features into a single wearable device was the grand slam of the industry so far.

For fitness enthusiasts who want lots of choices, 2017 will be a good year. Indoors or out, on land or in the water, alone or in a group of like-minded people, there is a fitness program for everyone who wants to start the new year out right.