Why has apple cider vinegar, of all things, been one of the most successful and popular nutritional supplements for more than a century? The stuff tastes terrible, smells like something you’d put in your garage to ward off rats, and doesn’t go down the throat with ease. The French word “vinegar” literally means “sour wine,” which speaks volumes about the taste of ACV. 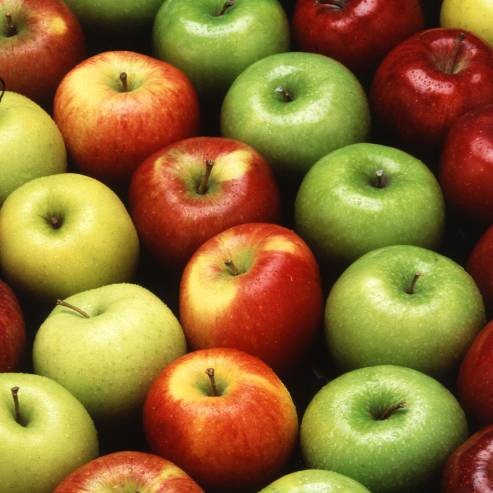 But its purported ability to fight dandruff and help overweight people drop pounds makes up for all that, apparently. Since the days of the famed Greek physician Hippocrates (circa 460 BC, when the Buddha was still a teenager!), apple cider vinegar (called ACV by scientists and chefs) has been used to clean wounds, preserve foods, fight colds, battle sinus infections, and as an early “energy” drink. Vinegar is one of the few foods mentioned in both the Old and New Testaments of the Bible.

ACV is vinegar made from fresh apple juice that has been fermented. The organic versions look cloudy and somewhat congealed due to the presence of “mother of vinegar” (natural cellulose and acetic acid bacteria). Pasteurized, non-organic ACV does not contain this important compound that some believe is responsible for the liquid’s health benefits.

You can make your own (but it’s a grand mess) by squeezing the juice out of crushed apples, adding yeast and bacteria, and then letting this concoction ferment. Don’t stop here or you’ll just have a big vat of apple-flavored alcohol. Adding something called acetobacter will turn the alcohol into apple cider vinegar. The cost to make a gallon is about $20 in the do-it-yourself method, plus you’ll need several large tubs, a few specialized chemical additives (unless you have some acetobacter handy in the garage), and some preserving jars.

Or, you can fork over about $5 and buy a bottle of organic, raw ACV at your local health food store. Use it as a marinade, food preservative, salad dressing or drink additive. Even though ACV has been around for centuries, only since the 1970s has it caught on as a weight loss aide and infection fighter. Beware: If you drink too much of the stuff it can cause serious stomach problems, and pregnant women should avoid ACV altogether. And because it contains acetic acid, always be careful not to get ACV in your eyes.

What ACV can do

If you’re not scared off by the above warnings, or the smell of ACV, and still want to try it, here’s the good news: There are hundreds of claimed advantages for the use of ACV. The following are the main ones that have either been demonstrated in a clinical study or been supported by widespread popular endorsement:

It’s a natural antioxidant: Even though ACV only has about 3 calories in each tablespoon, it does contain some potassium, antioxidants and amino acids. Many users believe (but there’s no scientific proof) that the organic type of ACV is most powerful at fighting colds, sinus infections and flu symptoms.

ACV is a bacteria-killer: Consider that vinegars of all kinds have a long history as cleaning agents and as treatments for warts, skin infections, fungus on fingernails. That’s because vinegar has the chemical ability to kill bacteria and many other pathogens. Some studies have shown ACV as a capable agent against E. coli bacteria. It’s also a good preservative and wound disinfectant, for the very reason that it can eliminate bacteria.

It can help with weight loss: Though there are just a few scientific studies on this topic, ACV does indeed work as an appetite suppressant by decreasing insulin and blood sugar levels. This causes the widely reported “full” feeling that many people report after taking ACV with a small meal.

There were two studies that seem to support this claim. One showed that people did in fact feel full while taking a daily dose of ACV, and as a result they consumed fewer calories. The other study demonstrated that ACV leads to a feeling of fullness especially when combined with a diet that is high in carbohydrates.

ACV can help with regulating insulin and blood sugar levels in people who have Type 2 diabetes: This is the claim that has undergone the most scientific scrutiny, and ACV came out a winner. Even for those who do not suffer with diabetes, it appears that small daily doses of ACV can effectively lower blood sugar, a condition that leads to hundreds of physical problems for those over the age of 40.

Apple cider vinegar could (maybe) help the human body fight cancer: Animal studies, done on rats, showed rather conclusively that ACV has the power to shrink cancerous tumors and cause the death of individual cancer cells. The bad news: The studies were not on people, and the vinegar used was from rice, not apple cider.

It can possibly ward off heart disease and lower cholesterol: Most of the research in this area has been done on animals, not humans, but the results are encouraging nonetheless.

The most common uses of ACV are for colds, sinus infections, weight loss, and as an energy drink: While the science is lacking in most of these areas (except weight loss, see above), this is one case where you can try ACV for yourself and see if you get any relief. Especially for a nasty sinus infection, some people have experimented with ACV before turning to over-the-counter medications and been quite surprised.

In places like India, Japan, China and Australia, it’s quite common to use ACV as a cold/flu remedy at the first sign of symptoms, which is said to be one of the “secrets” to the power of ACV. Because the stuff has no dangerous side effects in small doses, and the cost is reasonable, millions of consumers in the U.S. are now discovering what people in Asia have known for hundreds of years: that ACV can help combat an upper-respiratory infection if you catch the illness early enough and ingest at least one tablespoon three times per day.

As for the “energy drink” properties of ACV, some people report that an early morning dose has an effect similar to that of a cup of coffee, but without the caffeine. In ancient times, this was one of the primary uses of ACV besides as a disinfectant and cleanser.

One of the most popular diets used by the Japanese (note that you don’t see very many obese Japanese people, so there must be something right about the ACV diet), the apple cider vinegar diet is also one of the simplest diets in existence.

Because the vinegar works, apparently, as a long-term appetite suppressant and digestion-enhancer, all you have to do is add it to your daily intake. Here’s how: Drink an 8-ounce glass of water that contains one tablespoon of apple cider vinegar. Do this about 10 minutes before each of your three daily meals. That’s it. No calorie counting, food weighing, weekly meetings or books to read. Just drink the boring ACV water thrice per day before meals and watch your appetite decrease and, theoretically anyway, the excess pounds disappear.

How to Buy ACV

Purists who tout the many benefits of ACV insist that the best way to maximize your apple cider vinegar “bang for the buck” is to use an organic version that is also listed as “raw” or unfiltered. Most health food stores sell several varieties of ACV, so make sure you are getting the kind you are shopping for.

Studies that measure the ability of ACV to fight colds and sinus infections (the second most common use for ACV besides in diets) generally look at the effects of raw, organic apple cider vinegar because it contains many more nutrients than the filtered, processed brands.

Also be aware that if you use ACV in cooking or food prep, much of it can be altered by heat, thus destroying many of its beneficial properties. As a salad dressing or hot drink additive, ACV seems to work best because the salad or tea absorbs the bad taste but maintains the chemical properties that work all the magic.

The Verdict on ACV

While there is plenty of science that demonstrates the benefits of ACV, consumers should be careful not to overdo it. Too much of the stuff, besides tasting absolutely terrible, can cause stomach problems, hurt your tooth enamel, and possibly upset your digestive system’s natural ability to regulate its acid-base balance.

The benefits of ACV are well known, if not proven scientifically in every case. Even though there has been some limited research on its ability to help fight obesity, as the Japanese have long believed, most studies have been inconclusive. However, apple cider vinegar has a pretty good track record as a dietary supplement for those who want to control their weight, blood sugar levels, and fight Type 2 diabetes. Millions of people all over the world swear by the stuff, if that counts for anything, as a remedy for dandruff, excessive appetite, sore throats and varicose veins.

As always, the above discussion is intended for educational purposes only and should not be taken as medical advice or guidance. Always speak with your personal health care provider before beginning an exercise program or adding/subtracting anything to your regular diet.