Home / All Natural Foods / Why Does The American Heart Association Keep Lying About Coconut Oil?

Why Does The American Heart Association Keep Lying About Coconut Oil? 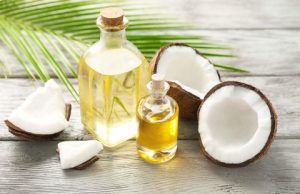 Where nutrition is concerned, there is always great debate. What is good for you one day may be the worst thing ever imagined the next.

Lately, the greatest debate has centered around coconut oil. On the one hand, its proponents say it can do everything from increasing brain function to helping you lose weight to strengthening your heart. At the same time, on the other side of the debate, there are those who say the increase of LDL ( low-density lipoprotein) cholesterol increases the risk of heart disease.

Let’s take a look at the arguments. First, the anti-coconut oil side.

Arguments Made By Anti-Coconut Oil Supporters

Arguments Made By Pro-Coconut Oil Supporters

As in any debate, there is another side to the coconut oil question. Here are some of the points made by them.

An earlier (1989) study divided 10,000 men and women into two groups. One group followed a diet with 9% saturated fat while the other group followed a diet with 18% saturated fat. The results after four and a half years showed the group who consumed more saturated fat to be healthier than the low-fat group. Those in the low-fat group showed no decrease in risk factors that damage the heart and no decrease in deaths compared to the high-fat group.

This sounds good, but there was a problem. The group who ate the low saturated fat diet also got continuing counseling in nutrition and supervision in what they ate. The other group was unsupervised and received no nutrition counseling. This is a very good example of performance bias and poor research design. Nowhere would this kind of research be accepted, other than by the AHA.

There is good evidence that saturated fats actually increase the size of LDL particles! This increases the possibility of them being safer.

So there you have it. Enough information for you to make your own decision regarding whether to use coconut oil.

It comes down to this: Do you believe a large, possibly biased organization that appears to use outdated and flawed research or do you believe current research from multiple sources that seems to indicate evidence is present that shows coconut oil to be beneficial to heart health and may have other beneficial properties as well?

The choice is yours. I know where I’ll put my money.

The Truth about Coconut Oil  https://www.sparkpeople.com/resource/nutrition_articles.asp?id=1799

Is Coconut Oil Bad For You?  https://www.pritikin.com/your-health/healthy-living/eating-right/1790-is-coconut-oil-bad-for-you.html

The Truth About Coconut Oil and Your Heart  https://www.onnit.com/academy/the-truth-about-coconut-oil/