The Gluten Revolution: Is It Necessary? - Healthy Living Association

Home / Diet Plans / The Gluten Revolution: Is It Necessary?

The Gluten Revolution: Is It Necessary? 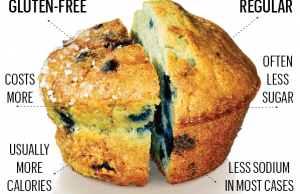 Nearly everyone seems to be doing it, going gluten-free, that is. But how many even know what it means to eliminate gluten from their diet and why they’re doing it?

The gluten revolution has been hyped and applauded by many celebrities and athletes as helping them feel better, have more energy, and lose weight. So, of course, it must be scientifically valid. Isn’t it?

For some people, yes, it is.

Who Really Benefits From Being Gluten-Free?

There are those who genuinely have physical issues with gluten and must avoid it or suffer sometimes severe problems. These folks must adhere to a gluten-free diet.

Before we talk about how many people that is in the U.S., we need to understand just what gluten is. Most people have little or no idea what it is. Many think it’s a grain of some kind. Actually, gluten is made up of a number of proteins found in wheat especially, but also in other grains, that cause an autoimmune response when eaten by people who have celiac disease.

Celiac disease occurs when a person with the genetic make-up to have the disease. When these people consume gluten, they have a severe reaction that damages the small intestine and sets in motion an immune attack on their own bodies. This reaction inhibits their ability to absorb nutrients from their food and may lead to other autoimmune diseases like Type 2 diabetes, epilepsy, and migraines. Some of the symptoms of celiac include iron deficiency, bone and joint pain, and fatigue.

Now, how many people are we talking about? In the U.S. about 1 in 133 people suffer from this disease. That’s not a great number, only about 0.5% to 1.0% of the population. This puts it in the category of common when considering all diseases. We’re talking about around 3 million people in the U.S.

Another category of people who may benefit from being gluten-free are those with non-celiac gluten sensitivity. Those who suffer from this phenomenon experience brain fog, gastrointestinal distress, and joint aches and pains when they consume something containing gluten. But they do not test positive for celiac.

Although non-celiac gluten sensitivity has been accepted by many medical professionals as a genuine illness condition, there are some professionals who are not convinced. Researchers in 2012 evaluated 920 people who had been diagnosed with non-celiac gluten sensitivity. They conducted a double-blind experiment in which they gave everyone capsules filled with either wheat flour or a placebo. No one knew who got which capsule.

Nearly two-thirds of the participants responded opposite of what the experimenters thought they would. Either they got better on the wheat capsules or worse on the placebo capsules. Of the one-third who responded the way experimenters thought, there was a definite benefit from a gluten-free diet. This suggests the possibility of the non-celiac wheat sensitivity being a genuine condition. Possibly, this is a different condition than gluten sensitivity.

One interesting result of this kind of research has been the fact that those who were informed that keeping to a gluten-free diet was not helping them reported feeling better subjectively. Some discussion regarding whether going gluten-free improved the mood of people with wheat sensitivity came from this research. Non-celiac gluten sensitivity has not been proven yet, but can’t be dismissed, either.

Even with the general acceptance of non-celiac gluten sensitivity as a condition, there are still a number of unknowns. There is little evidence of how it works, how much gluten can be tolerated, whether it’s reversible, and what might be long-term difficulties associated with not staying with a gluten-free diet.

People with this possible condition have been encouraged to slowly reintroduce gluten into their diet over several years to determine whether it is still a problem.

Overall, the prevalence and incidence of celiac disease has remained stable for a number of years. However, the number of people adhering to a gluten-free diet has increased by 300% over the past five years. This has occurred in spite of experts agreeing that people who don’t have either celiac disease or non-celiac gluten sensitivity don’t need to avoid gluten.

One reason may have to do with the gluten-free market being a multi-billion dollar market.

Research into gluten and its possible association with coronary heart disease shows some of the difficulties involved in research into dietary effects on health.

Gluten has been linked with coronary heart disease (CHD). CHD is a serious condition in which plaque builds up in arteries, increasing the risk of heart attack. About 370,000 deaths each year in the U.S. can be blamed on CHD.

The research showed no significant connection between the consumption of gluten over an extended period of time and an increased risk of CHD. In fact, the opposite occurred as mentioned in the above paragraph.

It is important to note this research may have had significant limitations. One of them was the use of food frequency questionnaires administered every four years from 1986 to 2010. It is difficult to see how the accuracy of trying to remember what was eaten for the previous four years each time can be verified.

However, this did not keep the researchers from declaring there is no significant connection between consumption of gluten and developing CHD. In fact, they suggested the elimination of gluten from the diet could also limit the consumption of beneficial whole grains, leading to the development of other diet-related illness conditions.

Gluten-free diets are not recommended for everyone. The approximately 98% of people who do not have celiac disease or non-celiac gluten sensitivity are not encouraged to go on a gluten-free diet.

One of the major risks of gluten-free diets is limiting or eliminating essential nutrients when grains are avoided. This can lead to deficiencies in niacin, calcium, thiamine, iron, and folate.

Another risk factor of gluten-free diets is constipation due to a lack of dietary fiber. One of the most common sources of dietary fiber is whole-grain breads and cereals. When this source is removed, the lower level of fiber brings on complications.

The immune system can also be compromised with a gluten-free diet. The potential is present for a decrease in beneficial gut bacteria such as Bifidobacterium and Lactobacillus. Lower levels of these bacteria can influence the immune system negatively.

Foods needed for a gluten-free diet are also more expensive, possibly increasing the budget for food by one-third. There may also be less variety, although this is increasing dramatically with the increased demand for the products. People don’t often understand that gluten can be found in cosmetics, medications, shampoos, and lotions, also.

Making the switch to a gluten-free diet may not be the easiest thing. It requires a lot of reading of labels on foods to see whether they contain gluten. You have to see the term ‘gluten-free’ to be assured the product is genuinely free of gluten. Otherwise, you may have to contact the manufacturer of the product.

A major potential risk of a gluten-free diet has to do with the gluten itself. Deciding to limit or eliminate gluten without a professional opinion regarding whether it is necessary can significantly deteriorate the ability to determine whether celiac disease is present.

How To Determine If You Have Celiac Disease

When trying to see if you have celiac disease, the basic first step is to see your family doctor for a complete physical.

Once this has been completed, consult a specialist in celiac disease and/or wheat allergies to determine the presence of either or both. If you are allergic to wheat, you have to avoid wheat, but not other grains with gluten. If you have celiac, you must avoid gluten. In order for this to be determined, you must be eating gluten.

If you don’t have either a wheat allergy or celiac, but have symptoms, you can benefit from seeing a registered dietitian to determine whether your diet is sufficient for nutrient-rich, naturally fiber-rich foods. This kind of diet, combined with sufficient exercise, can improve your health and well-being.

If your symptoms continue, you may have non-celiac gluten sensitivity. This new illness condition can be difficult to deal with. You’ll need to consult a gastroenterologist and determine, with his or her help, whether you need a gluten-free diet.

Even though going gluten-free is a popular fad and may be necessary for some, especially those with celiac disease, the diet isn’t for everyone. Indeed, it has sufficient risk factors not to recommend it to anyone who hasn’t been diagnosed with celiac. The diet has not been proven to be beneficial unless the disease is present.

Should You Be Worried About Gluten?  https://www.muscleandstrength.com/articles/should-you-worry-about-gluten

When to Worry About Gluten, and Why I Don’t  https://www.huffingtonpost.com/charity-curley-mathews/when-to-worry-about-gluten_b_3087326.html

Gluten free: Fad diets are all the rage but here’s why they shouldn’t be  https://geneticliteracyproject.org/2017/02/01/gluten-free-fad-diets-rage-heres-shouldnt/

Gluten Free Is Not Healthy  https://elanaspantry.com/gluten-free-is-not-healthy/

Do not avoid gluten unless you have celiac disease, researchers say  https://www.medicalnewstoday.com/articles/317274.php

How a Gluten-Free Diet Can Be Harmful  https://nutritionfacts.org/2016/02/23/how-a-gluten-free-diet-can-be-harmful/

The Reality Behind Gluten-Free Diets  https://www.uwhealth.org/nutrition-diet/the-reality-behind-gluten-free-diets/31084

Should We All Go Gluten-Free?  https://www.medscape.com/viewarticle/857971