Starbucks and McDonald’s: Reality vs. Perception

Two of the world’s biggest retail food and drink companies go head to head in literally hundreds of major markets. While most consumers correctly perceive that Starbucks tends to charge more for similar items that can be purchased at McDonald’s, there is a collective social fog when it comes to nutrition and quality comparisons between the two companies.

Starbucks has spent untold millions on advertising in order to create its “quality” image, while McDonald’s has spent decades perfecting the art of the quick meal. When consumer preferences began to change about 10 years ago, and quality began to replace “value” as the holy grail of the fast-food crowd, Starbucks became the new star of the retail beverage segment.

McDonald’s has had to play catch-up. It’s not easy for giant corporations with thousands of storefronts all over the world to adapt rapidly, but eventually Mickey D’s pulled it off. The former burger-and-fries behemoth now offers a complete line of coffee and tea drinks that compete directly with Starbucks. McDonald’s also began adding healthier choices to its menus, streamlined the ordering process, and kept prices well below its competitors, especially newer competitors like Starbucks and upscale sandwich shops. 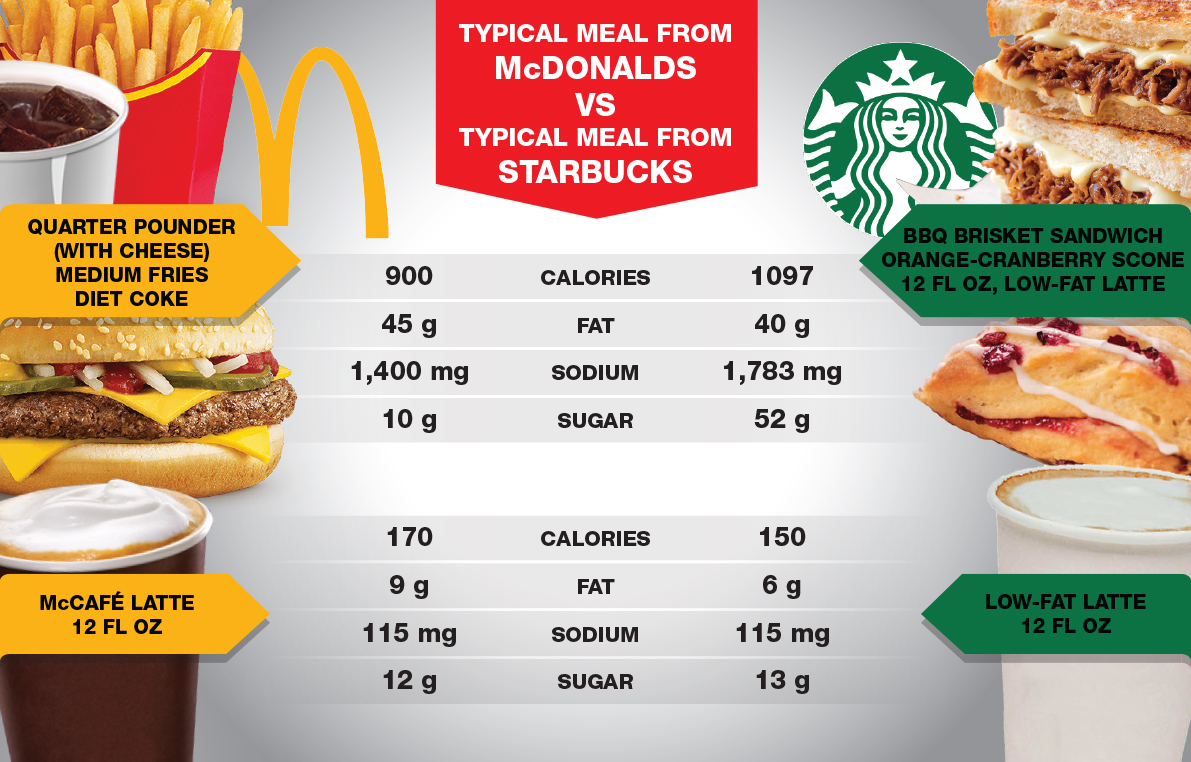 While McDonald’s 36,000 worldwide stores notch upwards of $27 billion in annual sales against Starbucks $17 billion, there has been a more subtle battle going on between the two: McDonald’s corporate team is pulling out all the stops to beat Starbucks at its own game, by offering quality coffee/tea drinks at low prices, and delivering a wide variety of healthy food choices that contain less sugar and fat than Starbucks’ fare. Have they succeeded? Here are some of the raw numbers that tell the story of McDonald’s vs. Starbucks, in terms of caffeine and sugar content, price, and overall nutrition:

Starbucks can’t hold a candle to McDonald’s in the solid food category. With thousands of stores worldwide, and an evolving menu of healthy and not-so-healthy old favorites, McDonald’s has perfected the art of comfort food, reasonable prices and fast service. Average wait times at McDonald’s locations hover in the 3-minute range, while Starbucks’ average waits are in the scary 10-minute range. And because the coffee chain has no in-house kitchens, their foods must be shipped in, already wrapped and not very fresh.

Some Starbucks locations now offer “breakfast” rolls and sandwiches, but they pale by comparison with McDonald’s full menu of warm, freshly cooked breakfast items. Price comparisons in the food category show McDonald’s in a very favorable light once again. As a rule of thumb, a non-fresh breakfast sandwich at Starbucks costs about twice what a freshly prepared one does at McDonald’s.

Two years ago Starbucks purchased La Boulange, a company that makes pastries, and began selling a full line of baked goods in thousands of its locations. Soon, the coffee chain will be rolling out a fuller food menu, with sandwiches, bakery items, desserts, breakfasts and salads eventually coming to most stores. Again, the fact that Starbucks has no in-store kitchens means they have to rely on already-prepared food that is neither fresh nor very healthy. Consider the following:

The fast-food giant comes in for plenty of criticism in the media, while Starbucks is currently enjoying its status as the king of quality in the coffee and snack segment. The truth of the matter is, however, that a cup of coffee and a meal at McDonald’s is much less calorie-laden, contains less fat and sugar overall, and costs much less than comparable fare at Starbucks.