CBD or Opioids: Which is Better for Pain Relief? - Healthy Living Association

Home / General Health and Well Being / CBD or Opioids: Which is Better for Pain Relief?

CBD or Opioids: Which is Better for Pain Relief? 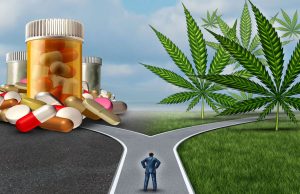 Pain is a very unpleasant sensation you experience when something is wrong with your body. It’s a warning sign and can be stinging, burning, prickling, or an ache. If pain gets bad enough, it can severely limit your ability to be productive and can strongly affect your well-being. Pain is very subjective thing, and your genetic makeup will determine how much pain you feel and your risk for developing pain.

Over 11% of American adults have experienced pain every day to some extent over the last three months. A significant number of these adults experience pain which they place at the severe level.

This large number of people dealing with pain has led to a significant increase in the prescription of pain medications, primarily opioids. Prescriptions for opioids jumped from around 76 million in 1991 to 207 million in 2013.

Considering the great risk for developing a physical and psychological dependency on these medications, these numbers alone indicate the seriousness of what is being called the opioid epidemic.

Opioids are a class of medications that includes heroin, morphine, hydrocodone, oxycodone, fentanyl, and codeine. All of these medications carry a tremendous risk for addiction.

These opioids are synthetic chemical compounds that mimic the action of opium derived drugs. They are highly addictive, much more so than natural opium compounds.

According to the Centers for Disease Control and Prevention, deaths from opioid overdose were five times higher in 2016 than in 1999. In the years from 1999 to 2016, over 200,000 deaths due to opioid overdose have been reported.

Physicians continue prescribing these medications for pain because they are effective for acute pain that only lasts for a short time. Unfortunately, many times the people who are taking these medications don’t want to run the risk of hurting again, so they return and ask for more from their physicians.

Because there is no objective method of measuring pain, physicians find it easier to write another prescription rather than stopping the medication and risking withdrawal symptoms in their patients. Unfortunately, there are few other pain-relieving medications that have the power of opioids.

The ease of becoming dependent and overdosing on opioids has become frightening. Recently, due to the increasing number of deaths from opioid overdose, the use of CBD for pain control has become a more attractive option.

CBD, or cannabidiol, is one of over 80 compounds in the marijuana plant. Most everyone knows about THC, tetrahydrocannabinol, the addictive psychoactive compound in marijuana, but not as many know about CBD.

Unlike THC, CBD does not make a person intoxicated or produce euphoria. It is an effective pain reliever. THC has also been shown to be effective in dealing with pain sensations, particularly in cancer patients. But the euphoric and intoxicating effects of THC have hampered the research necessary to show the pain relieving benefits of CBD.

There are two types of receptors in your brain and immune system, CB1 and CB2, that can be activated by the compounds in marijuana. When marijuana is smoked, the THC stimulates the CB1 receptors, resulting in euphoria and intoxication. But when CBD is used, it doesn’t stimulate either of these receptors or does so with very little effect. In fact, CBD stimulates these receptors 100 times less than THC.

Instead, CBD works on other brain signaling systems to bring about its therapeutic effects. This compound has been shown to decrease signaling in pathways in the spinal cord related to nociceptive pain, but not to affect other pathways that send messages about other things. One good thing about the way CBD works is that it doesn’t completely shut down your feeling of pain but lowers it so that you will know when you do something that aggravates your pain, but most of the time you’re able to continue doing what you need to do.

In all of the countries where CBD is legally obtained, no known cases of misuse have been reported. Research in these countries support the finding that there are no euphoric or intoxicating effects from CBD, nor is it addictive.

One reason there are no addictive effects from CBD is that it is already available in your body. The endocannabinoid system, or ECS, produces CBD naturally. This is the brain system that is responsible for sleep, immune responses, and healing. Because of this, your body can use CBD just like it uses natural supplements like vitamin D or vitamin C.

What Can CBD Be Used For?

Research from other countries has shown CBD to be effective in many ways. Pre-clinical research has shown CBD to have properties that protect against seizures, relieve pain, fight tumors, reduce psychosis, relieve anxiety, and protect neurons.

This article will focus only on the benefits of CBD for relieving pain.

One study from 2012 showed CBD to inhibit chronic inflammatory and neuropathic pain in rats without resulting in tolerance. Tolerance happens when the amount of whatever is used to relieve pain no longer works effectively, leading to more of the substance needed to get the same pain relief.

While little is understood currently about how CBD brought about the pain relief, it appears the compound has an action on a receptor in the spinal cord that plays a major role in controlling chronic inflammation.

Studies have demonstrated the ability of CBD to deal with both neuropathic and nociceptive pain. The latter kind of pain is the most common in your body. Nociceptors around your body detect things that may cause harm to your body. It also has been shown to be effective when other forms of pain relievers don’t bring relief.

A study in 2008 reviewed a number of experiments with CBD and its ability to relieve chronic pain. The general finding was that CBD is effective in remediating pain overall and has no side effects. Of particular interest in this study was the effectiveness of CBD to deal with insomnia resulting from chronic pain. A side note reported that CBD is also effective in helping people with multiple sclerosis (MS).

Another experiment showed the use of CBD across the skin as a gel was effective in handling pain from arthritis. This result is important because CBD has poor bioavailability taken orally.

Several studies have supported the use of CBD and THC together. Taken together, these two compounds are more effective than either one of them used alone. Apparently, using CBD with THC reduces the euphoric and potentially addictive aspects of THC alone.

One study conducted in Canada showed a buccal spray with combined CBD and THC to be effective in handling the neuropathic pain experienced with MS. There were no reported side effects.

Numerous studies have investigated the endocannabinoid system, ECS, and its ability to fight pain. The results have been consistent. Cannabinoids from outside the body increase the ability of the ECS to handle pain.

Even in cases where the pain experienced has proven hard to control, use of CBD has been effective and has caused no side effects.

Potential Side Effects of CBD

Even though research has shown no significant side effects as a result of taking CBD as a pain reliever, some people have reported mild side effects on occasion.

Some people have reported a lowering of blood pressure. If you’re already experiencing low blood pressure, this may leave you feeling dizzy or lightheaded, if you have it as a side effect. For people with high or normal blood pressure, it likely won’t be an issue.

Other people have reported dry mouth as a side effect. This has been reported only in a few instances and is handled relatively easily.

The most common side effect of CBD, where there are any at all, is sleepiness. Most of the time, this comes with fairly high doses of CBD. You and your healthcare professional may have to adjust your dosage to give you the best benefit and least drowsiness.

The Future of CBD for Pain Relief

Even with the increasing risk of overdose death from opioid medications in the treatment of pain and the increasing evidence from other countries about the effectiveness of CBD for control of pain, there has been insufficient research in the U.S. into CBD and its uses. A part of this lack is political in origin. Politicians are a notably risk-averse group. None of them seem to want to be the instigator of research into marijuana because of what could be negative publicity for them.

There has been testimony before Congress regarding the use of CBD for the treatment of pain in addition to other potential uses. That testimony concluded with the plea that further research is needed to determine the effectiveness and safety of CBD in medical uses.

To this point, CBD and other products from marijuana are still considered illegal by the federal government. However there are a number of states that allow the medical use of marijuana, including CBD.

Hopefully, the potential benefits of this compound will be shown so remarkably that the federal government will see fit to authorize and financially support the research needed so badly.

The Biology and Potential Therapeutic Effects of Cannabidiol  https://www.drugabuse.gov/about-nida/legislative-activities/testimony-to-congress/2015/biology-potential-therapeutic-effects-cannabidiol

Meta-analysis of cannabis based treatments for neuropathic and multiple sclerosis-related pain.  https://www.ncbi.nlm.nih.gov/pubmed/17257464/

The effectiveness of cannabinoids in the management of chronic nonmalignant neuropathic pain: a systematic review.  https://www.ncbi.nlm.nih.gov/pubmed/25635955

Using CBD Oil for Pain Management: Does It Work?  https://www.healthline.com/health/cbd-oil-for-pain

Cannabinoids in the management of difficult to treat pain.  https://www.ncbi.nlm.nih.gov/pubmed/18728714